This morning I arrived onto site late but just in time for the mid-morning tea bell. I ran into Cliff and Geoff by the greenhouse, trying to fix the door which spontaneously detached itself and launched onto the main path. Between Cliff, Geoff, Will and myself, we reattached it and put in new glass. All that work meant it was time for a break and everyone came out of the woodwork for tea.

World put to rights over a cuppa and several biscuits, I left to check on the chicks. All three seem to be doing well and have grown even in the last few days. The Plymouth Rock chick is joining in the fray and holding its own which is a relief! There is a distinct colour difference between the two golden laced Wyandottes which I am hoping relates to breeding difference rather than one being a cockerell. I guess only time will tell!

I spent a while going over the plot with the new hoe and mini rotavator, clearing the weeds which insist on sprouting the second we get any rain. The heavy rain we have had over the past few days has done wonders for the plants and has refilled the waterbutts. I decided to enjoy my afternoon snack on the bench outside the shed in the sunshine. The weather today is glorious when the sun isn’t hiding behind the clouds.

Next I walked down to the main coop and spent some time with the old girls. They enjoyed their sunflower seeds and oats whilst I cleared the coop out. Provided the weather is dry tomorrow, it’s time to clean out the coop fully. It’s a long job but it’s much faster if you aren’t battling to dry the perches in the pouring rain!

Steve popped by to let me know the new Queen bee for the nuc box arrived yesterday. He had put her in and the colony had accepted her. This should mean the new split hive will flourish. Depending on the year the Queen is born, they are marked with a different colour. As the new Queen is this year’s, she has a green mark on her back. It’s extremely useful to bee keepers as it makes her stand out from the thousands and thousands of worker bees that surround her. 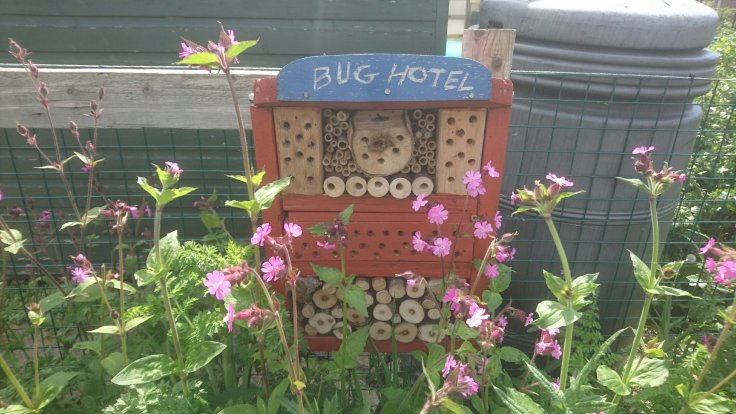 I walked down to the Community Garden to check on the olive tree. It seems to be doing well and the rest of the garden seems to be growing rapidly. The plants have been in for over a year now and it’s beginning to mature. Still no view of the black koi karp but Cliff has seen it recently.

Mel kindly offered me a couple of deck chairs last week and I found she had left them for me by the shed. I set them up in the patio area and spent a lovely hour half dosing in the shade watching Emily and her chicks. 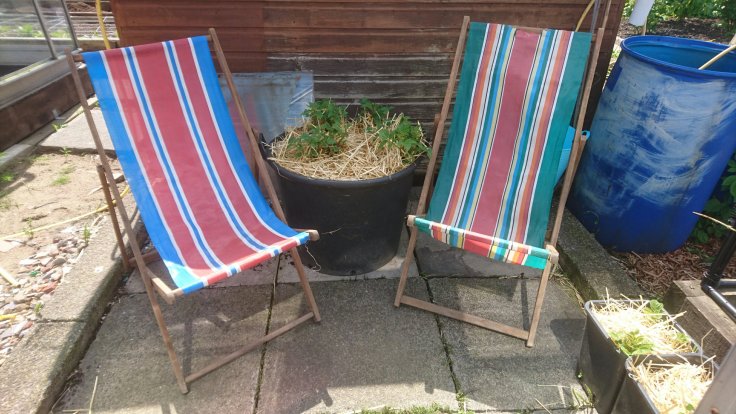 Deciding I probably shouldn’t fall asleep properly, I went into the greenhouse and fed Emily some meal worms. I love watching the chicks following Emily around. It’s interesting to see how carefully Emily shows her chicks how to scratch, clean and eat. Wherever she goes and whatever she does, she has three fluffy shadows copying her.

Emily and her chicks enjoy the sunshine

2 thoughts on “Chicks and deck chairs”