Despite the overcast weather, it was pleasantly warm as I walked down to the allotment this morning. I arrived laden with chicken supplies. My husband had dropped me off at the pet food supplier before he left for work so I could stock up on vitals including chick crumb, grit, porridge oats, sunflower seeds and growers pellets.

I lugged all the supplies to the allotment and split them between the main coop and the greenhouse. Emily and her chicks continue to thrive and the chick’s feathers are definitely looking more impressive. Steve keeps saying all three are cockerels but I am currently living in a happy world called Denial.

I passed Cliff who mentioned that the bee hotel on Neil’s plot had 12 bees on it – each bee uses one hollow bamboo stick to lay an egg in before sealing it up. My bug hotel seemed to have a lot of the bamboo sticks sealed with mud at the end. Cliff came to check and between us we counted 35 sealed holes!

We decided it would be a fun project to make another bee hotel. Between us we found a plastic tub, some old bamboo poles, wooden plank and some old branches. Cliff dug out his drill, several drill bits and we began.

First, Cliff cut the wooden plank to size and we took turns in drilling holes into the wood. These are small holes several inches deep into the wood which insects can use as burrows. We tried a couple of different drill bits and managed to squeeze in lots of burrows. Next we screwed the wooden bar into place and moved onto the next phase.

While Cliff set up a work bench, I sanded down the wooden bar. It came up beautifully. When Cliff reappeared he had a small section of chicken wire which we folded and placed behind the wooden bar. This wire has two purposes. First, to help secure the bamboo and stick burrows into place and secondly, to provide some ventilation to the back of the bucket.

Once we had set up the work bench, I got busy cutting the bamboo to size. It was going to be a long job! We decided to put in a vertical bar halfway along the base to split it into two smaller sections. The smaller sections meant we could pick in the bamboo sticks more easily and securely. I reached the end of the bamboo poles before the bucket was even half full. So I left Cliff to finish packing in the bamboo poles whilst I went off to scour the site for old sticks and branches to use instead. I found several and brought them back to cut up. As they were solid, Cliff used his drill to make a hole in each end. As these branches and sticks were thicker, we managed to fill up the bottom half of the bucket. We also experimented with using thick broccoli stalks to see if the bees would nest in there.

But what to do with the top? Cliff had an idea to put in a handful of straw at the back. This was a great idea as it provides a different type of home for other insects. We put in a couple of handfuls before Cliff added a base of an egg box. He drilled a few holes in it to make a different den for insects. Between us we decided to use sections of a thick branch to create bars to keep the straw and egg box in place.

As a final touch, we added in small sticks and bark to wedge in the bamboo sticks into place. Cliff then helped put it up on the side of the shed, next to our original bug hotel. Within a minute of being up, a curious bumble bee had a quick look around. Hopefully, it will be a good home for wild bees! 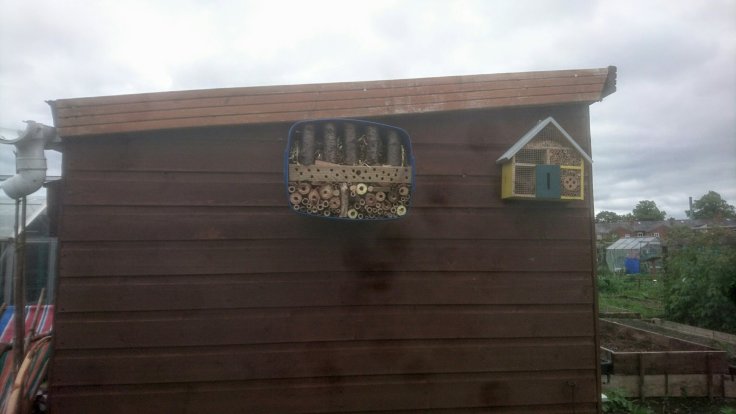 2 thoughts on “Building a Bee Hotel”