Today I went down to the allotment ready for a full day of work. In the afternoon we were expecting Steve’s bee mentor to arrive and I wanted to make sure that the plot was clear of weeds before they arrived. 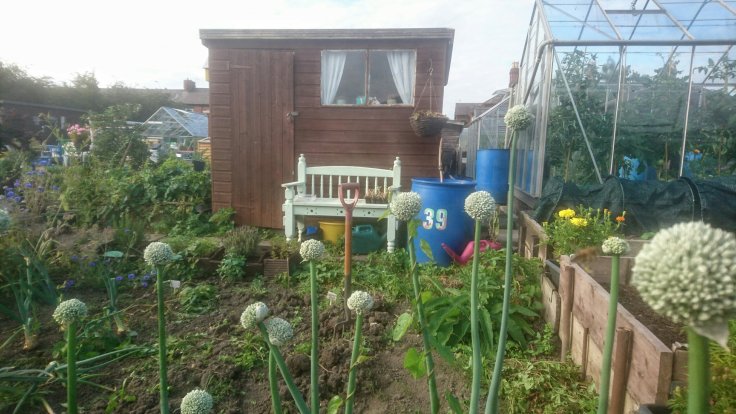 I joined Cliff and Michael at the clubhouse for a chat. It wasn’t long before I headed off to my plot to make a start. I hoed the whole of the top of the plot, removing as many weeds as possible. Although I still need to pick out the weeds, the top is now clear of growing weeds. It looks so much better!

Next, I walked down to the main coop and fed the chickens. The new chickens are still not fully integrated but the others are not attacking them in the same way. I found one egg under the coop again but the rest were split between the nest boxes. I left them to enjoy their treats and headed off to see the chicks.

The chicks were out enjoying the sunshine and were very keen to scoff the food I put out. They had managed to kick lots of dirt into their water bowl so I washed it out before refilling it. I managed to nab Phil in passing and he has agreed to take the golden headed cockerel to his friend. Although it is quite sad that we can’t keep Obi-Wan, he will be going to a lovely small holding. Phil said he will collect Obi in the next week when he has his day off.

My ponderings on chickens was interrupted by the happy chiming of the tea bell. I walked up to the clubhouse to find Geoff had arrived. We had a chat about his new chickens and how Emily is not really integrating into his flock. He is a bit concerned about one of his new chickens who has a dodgy leg. Cliff has had a look at it and has diagnosed bumble foot. The chicken is awaiting surgery next week! Geoff is wondering about taking her home as she is definitely being bullied by the others.

My next job was to tackle the strawberry bed. In the past two weeks the weeds have taken over the bed and I was determined to reclaim it. As I was busy weeding Chris walked by, keeping an eye out for important visitors. Today was the judging day for the Allotment Federation competition. Several plot holders have entered and Chris is in charge of leading the judging panel around the site. As I finished wedding, they had arrived and set off towards Mel’s plot.

I stopped and had a break, sitting on the bench outside the shed. Minor weeding aside, the plot is definitely looking better after two solid days of work. After sitting for a while, I joined Cliff, Phil and Chris in the clubhouse waiting for Steve and his bee mentors. Steve appeared at just before 3pm with Dan and Natalie arriving a quarter of an hour later.

We all suited up and started with the new hive on Phil’s plot opposite Ken’s. Steve checked the hive a few days ago and couldn’t find the Queen. Natalie had a thorough check of the hive and managed to spot several patches of eggs which implied the Queen had been there in the last three days. Just as we were starting to loose all hope of finding her, she spotted the Queen on the side of a nearby frame. Steve closed up the hive whilst we moved onto the next.

The hive on the path in the Community Garden should have had the Queen from the other hive that swarmed a couple of weeks ago. Again, Steve couldn’t account for the colony’s behaviour. We all searched the hive but no Queen presented herself. Between the three of us, we went through it with no success although Natalie did find eggs which pointed to the Queen being present. Steve again closed up the hive as Natalie and I moved onto the other hive.

This hive was weird. No brood (or hardly any), no eggs and no larvae. As we pulled out the frames, we found multiple capped Queen cells. One frame had 9 sealed Queen cells. As we watched, one Queen hatched! I have always wanted to see a queen hatch and it was incredible to see it. I spotted a Queen on top of the Queen excluder which was very odd. Natalie explained how new Queens are quite small and can get through the excluder. The bees around her were attacking her which showed they were rejecting her – this can be form a number of reasons. We took her out and the hive calmed down a bit.

We removed the frame and Steve went to get some boxes to put the Queens in. Assuming the colony accepts her, multiple Queens is not allowable. Within the hive, Queens fight to the death for the right to rule the colony. Some Queens manage to find other Queen cells and sting the developing Queen to death before she can hatch.

Dan took over and showed us how to hatch Queens and put them into a small box with several workers to look after her. By the time we had finished, we had 7 boxes, each with a Queen and several workers. It was fascinating to see Dan pick up bees carefully with his bare hands and pop them into the box.

Steve carefully reassembled the hive with Dan who spotted a Queen who looked very fit on one of the frames. Dan even heard the Queen making her call. It’s a very strange noise and hard to describe. I was especially impressed he could hear her over the huge buzzing from thousands of bees in the colony. On the floor, I spotted a wrestling match between a Drone and a wasp. It was a battle to the death, the bee fighting to the last to protect the hive.

The final hive on Phil’s main plot, Dan noticed how big it was. Despite splitting this hive twice already, it was comfortably big enough to split again. We went through the brood boxes and found this hive had several Queen cells. This suggests that the hive is getting ready to swarm. To stop them we either needed to add several more brood boxes to give them more room to develop or to split the hive again. Steve decided to do the latter and Dan organised collecting the frames and suggested splitting the hive twice. 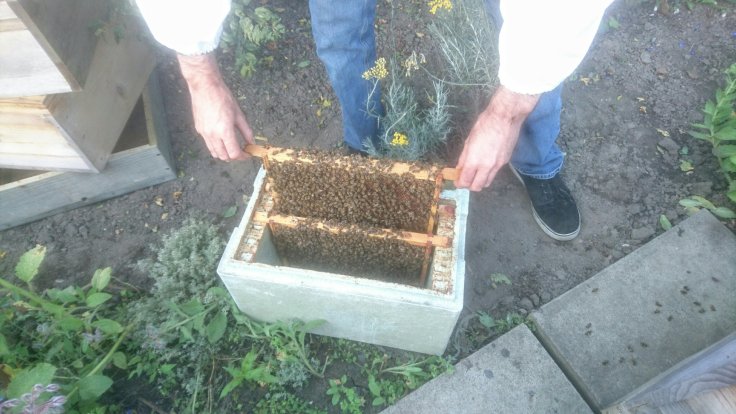 In a few minutes, both nuc boxes were filled with several frames of bees and the main hive reassembled. Steve moved the nuc boxes on to the Community Garden. We thanked Dan and Natalie before we all headed home for a well deserved rest after am exciting day!

2 thoughts on “A plethora of Queens”