This morning I ambled down to the allotment and joined everyone at the clubhouse before feeding the chickens. Geoff, Cliff, Phil, Dave the Plod and Coco were all there chatting away happily in the sunshine. As I arrived I heard an odd sound. If I had had a good night’s sleep, I would have confidently identified it as a cockerel crowing. But with less than 4 hours sleep, I told myself I was imagining things and it was just a hen laying a particularly large egg.

The first news was that there had been a fox attack. It had managed to dig a tunnel into Steve’s coop and made off with three of the chicks. Steve has since reinforced the coop to protect the remaining chicks in case it comes back. 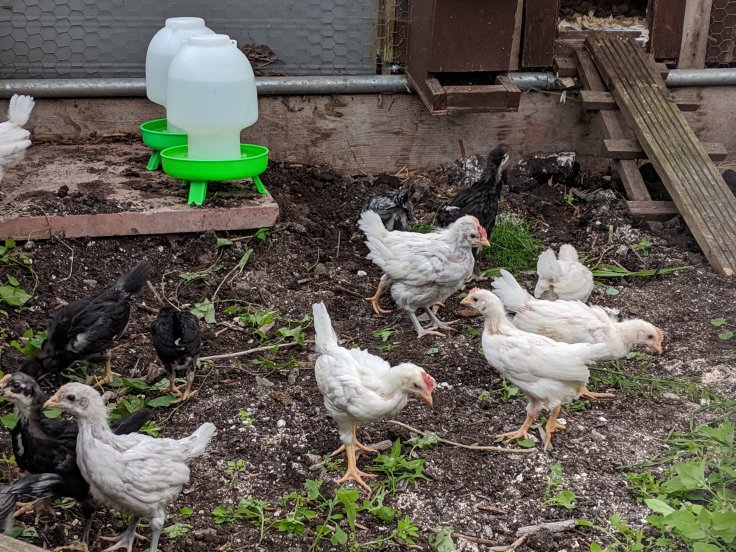 Sadly, the fox took a small leghorn cockerel that Phil, Cliff and Steve were hoping to breed from. The sole remaining leghorn cockerel died a couple of days ago. As getting hold of leghorns is very difficult up north, most breeders are based in Devon, Phil, Steve and Cliff have hatched a plan to breed their own. They have managed to hatch 10 pullets who will be paired with a non-related cockerel. Cliff tipped me off to go and look at the coop on Phil’s plot. 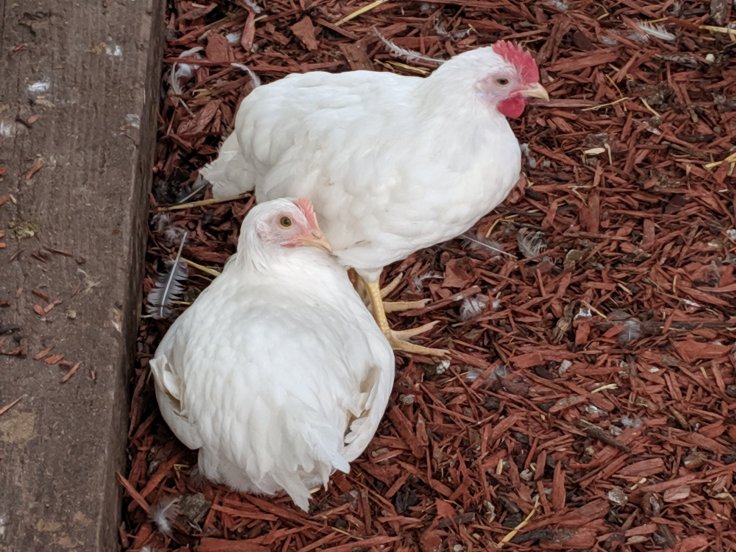 What greeted me was a spectacular looking pure white leghorn cockerel. It is truly magnificent, strutting around the coop, occasionally crowing proudly. Phil had managed to find someone online who was selling a beautiful 4-5 month old leghorn cockerel. Steve jumped into a car with Mick the Greek and went to pick it up. They returned a short while later with the cockerel. And a surprise. A second cockerel!

They have both settled in really well and are definitely in charge of the coop. Poor Phil went in to clean them out and got a peck on the forehead for his trouble! I guess the message is simple – don’t mess with a cockerel! The crow of a cockerel can be a nuisance but I love it. It adds another sound of nature to the site. I even managed to get a short video of one of the cockerels showing off!

Our gorgeous Plymouth Rock has been moved out of the greenhouse into the broody coop. This is partly because it’s summer and likely (in theory!) to be too hot for her in their and also the ready her for being an outdoor chicken. Happily, she is walking well and I didn’t see a single wobble today! Phil dropped by to check how she was doing and kindly offered to let me borrow his cream legbar chick to go in with Leia. It’s important that chickens aren’t on their own but introducing chickens can be difficult. You must supervise them carefully and I plan to introduce them in the next couple of days. Rather meanly, Phil said he couldn’t wait to see me do battle with the cockerel to steal one of his girls. I plan to go into the coop in full protective gear after that comment!

Our other girls are doing well and were pleased to see me. Or it might have been the food. But I prefer the first option! Evie was a bit quiet today and I caught her to check her over. Her legs need treating both for scaley mite and bumblefoot. I asked Cliff if his vet services were available tomorrow and happily he has a free appointment.

So tomorrow I will hoe over the plot provided it’s dry enough, measure out the extension to the coop on Rachael’s plot and spend some time arguing with cockerels whilst borrowing a hen…

2 thoughts on “Experiments with Chickens”