The weather was so lovely today that I walked the four miles home from work. It isn’t something I will make a habit of, especially after a long day at work, but after a breakfast meeting, it was lovely. I arrived home, changed quickly into scruffs and headed out to the allotment.

Upon arrival, I stopped by the clubhouse to say hello to Geoff and Cliff. Both of them were enjoying the sunshine over a cup of tea. I didn’t stop too long as I know once I stop and sit down, nothing gets done! 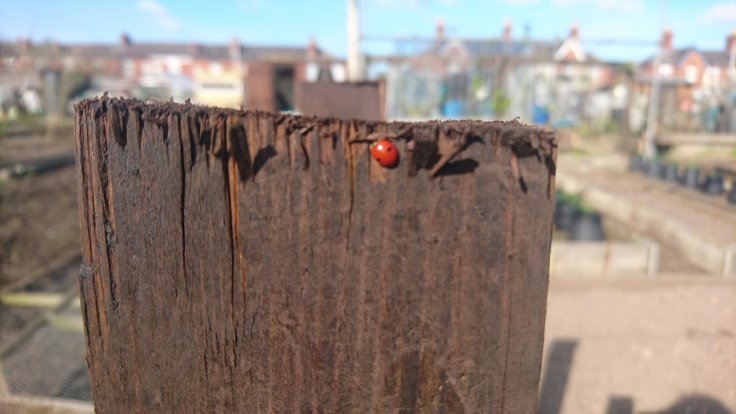 I managed to do the chickens quickly as their new feeder is massive and takes days for them to empty. Until I gave them their oats and sunflower seeds, I get no peace. I cease to be of interest once those have been handed out so I got on with cleaning out the nest box. I discovered 3 eggs in the main nest box and one in the smaller box. 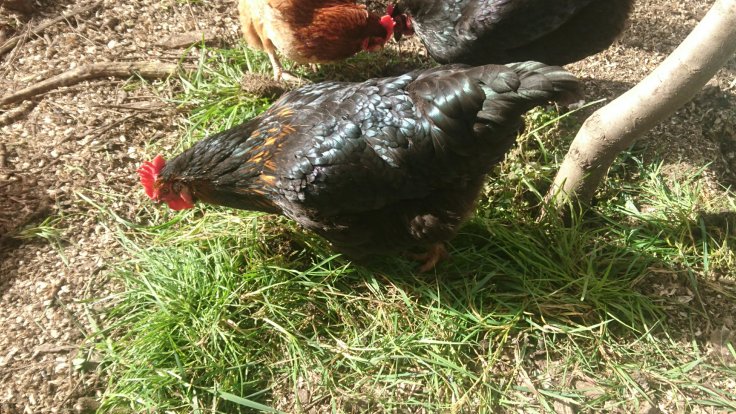 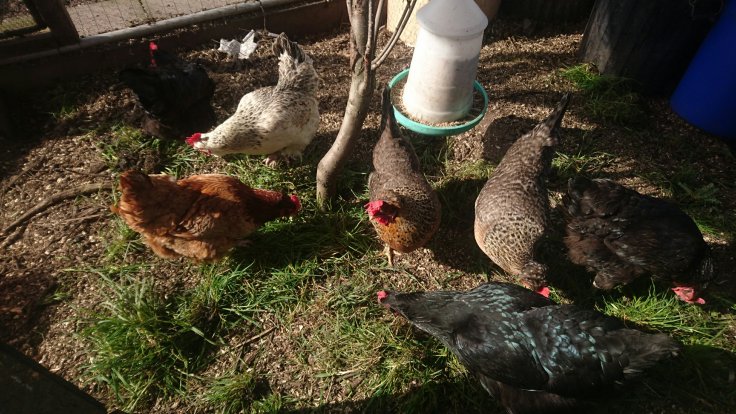 Chatting to the girls is always a relaxing way to pass the time. Wandering about the coop, I noticed that the cherry tree had started to sprout leaves ready for summer. These have appeared rapidly over the last few days. I hope this year to train the cherry tree across the top of the coop to provide dappled shade for the chickens.

After sorting the chickens, I popped round to Cliff and asked if I could borrow his fantastic contraption for hoeing. I managed to cover two thirds of the plot in mere minutes. I dropped it back to Cliff before chatting to Geoff about how it was so easy it was almost like cheating! 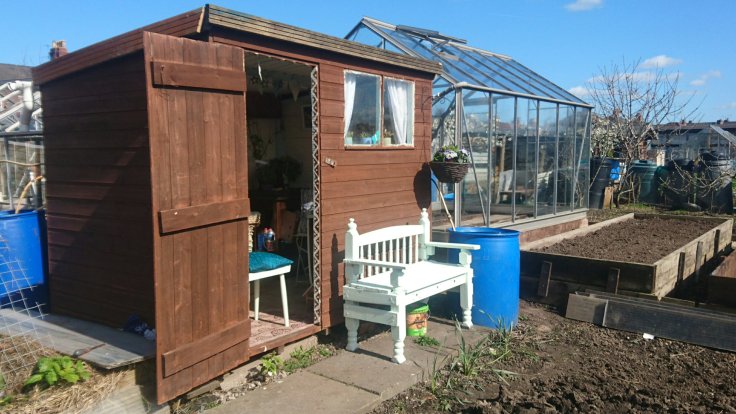 I battled to clear some of the weeds on the bottom of the plot. I decided rather than battle with a hoe on uneven and compacted ground, I would dig it over properly with a spade. I cleared a good section before having a break. 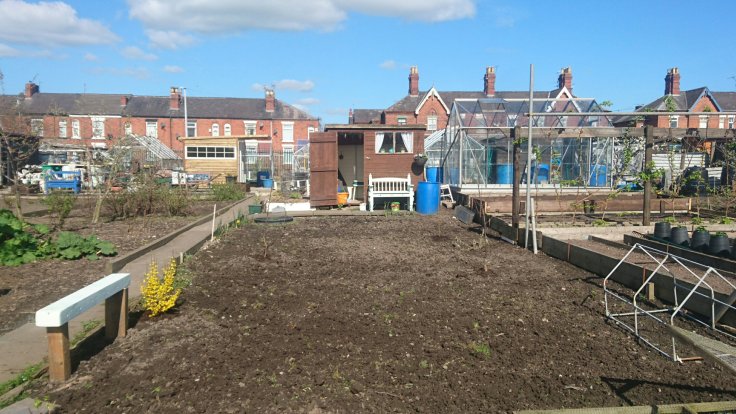 As I was digging, Cliff had appeared and had been busy putting up new guttering on our shed. We had to remove the old guttering when we fixed the roof a couple of weeks ago. It looks amazing and we are probably going to have to get another waterbutt to store the run off. 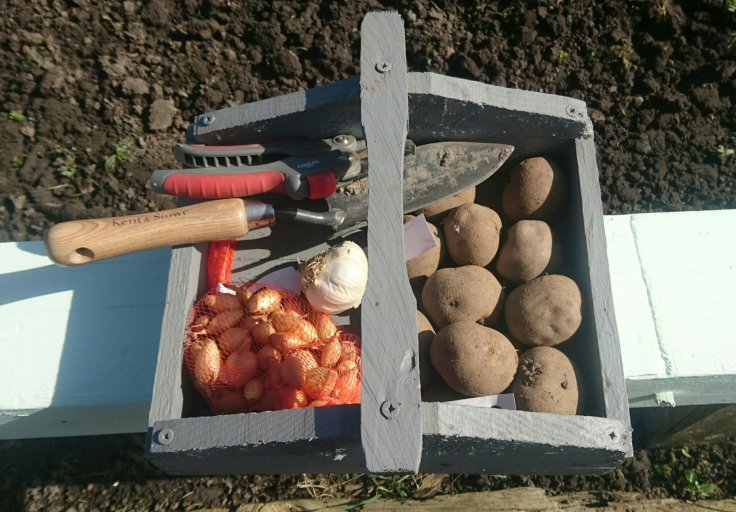 For something different to do, I made a start on painting the new bench. For artistic purposes, I thought I would just paint the top of it. I used the left over paint from the shed upgrade and the end result looks rather good, though I say so myself. Flushed with success, I ambled over to the bench in front of the shed and touched up the paint. The recent torrential rain had washed some of the paint off, leaving dark grey patches. The heat of the day meant the second coat of paint dried quickly. I washed out the brushes and put the paint pot into the shed before taking a well deserved break.

Pondering what to do next, I spotted the wooden frame that we removed from the greenhouse several months ago. I bought some climbing hydrangeas yesterday and thought they would be good to grow up a trellis. I did think about buying some panels but it seemed a bit pointless when I had some wooden frames already. I got out the frames and using copious amounts of garden twine, I made two trellis panels. Next job was to decide where to put them. In the end, I decided to put them in front of the black currant bushes as the back area is difficult to keep tidy and it always looks a little scruffy.

I dug a shallow tench to put the frames in and used wooden stakes to keep it in place. To ensure it stayed upright, I screwed the stakes to the trellis panels. I then built a small raised bed in front of it using compost from our compost heap and leftover wooden panels from the shed roof. Earlier in the day, Cliff had very kindly give us a beautiful passion flower plant. I decided to plant it in front of the small trellis panel and put both hydrangeas in to grow up the larger trellis. It will definitely look better when the plants are bigger and have grown up the trellis.

Whilst I was in the fruit area, I decided to tackle the raspberries and blackberries. With the secateurs, I cut away the old raspberry canes and trimmed off any old branches. Then I used the bamboo canes and garden twine to keep the taller canes upright. The lower string should support the smaller canes as they grow. Then came the blackberries. I have been putting dealing with these for ages. Armed with secateurs, I gave the bushes quite a good prune and thinned out some of the longer, trailing branches. The blackberry bushes are very keen to spread so tomorrow’s job is to dig up the stray plants so we don’t drown in blackberry bushes! As an added bonus, I pruned the tayberry and the wineberry plants.

So next job is to work out what to do with the broken greenhouse shield as it currently is covering a large part of the plot. We could try to rebuild it and use it for a fruit cage or even as part of a coop extension if there is enough room behind the fruit trees. Giving up all thoughts of what else needed doing, I spent a happy half hour watching the world go by as I sat in the shed before heading home.

4 thoughts on “A day in the sunshine”