It was freezing again on site this morning. The wind is dropping the air temperature down considerably. On the rare occasion the winds stops for a few minutes, it is pleasant enough with a warm jumper on.

I spent some time sorting out the shed and deciding where to put my wormer towers. Eventually, I decided that there wasn’t enough room or good enough access under the table so I put the wormery at the back of the shed. With the sun shining through the window, this back section of the shed is perfect to keep a warm temperature on cold days like today!

As I was walking over to the clubhouse I spotted a bird caught in one of Cliff’s traps. The rat traps often catch different wildlife who are tempted in by the tasty treats Cliff puts in. Today Mrs Blackbird had got herself stuck. Rachael and I managed to open the trap but it took several minutes to persuade the bird that she could go out. Finally, with a flutter of wings, she flew off. 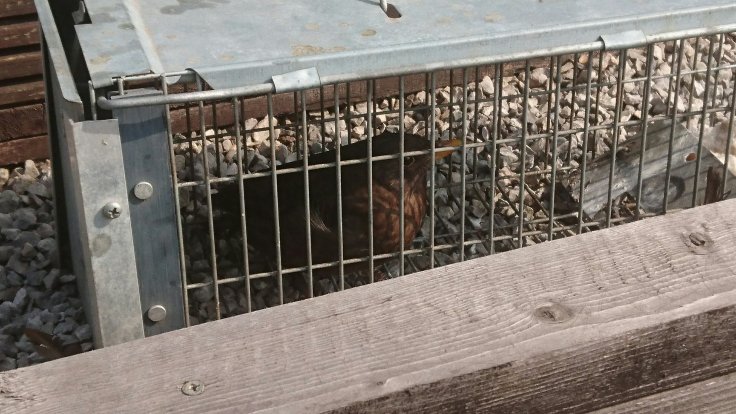 My next job was to plant out some more seeds but by now my fingers were turning blue. Instead, I chose to do a thorough watering of all pots and plants. It took several trips to the water butts but I am pleased with how well everything is growing. My climbing hydrangeas looked rather frost bitten a few days ago, have perked up under their grow tunnel and I think they should survive.

The willow trees and fruit trees continue to throw out new leaves so I am cautiously declaring success. I don’t expect any fruit on the trees this year but as long as they have settled in and are growing well I will be happy. I have plans for the willow by the bench but it all depends on how it grows and on my weaving skills!

I fed the chickens who were unimpressed at the lack of treats two days in a row. I promised them I would go out and get their treats this afternoon. Three eggs today which isn’t bad considering the sudden drop in temperature. Emily is continuing to be a shining example of what a broody should be. Three days in and she looks well if rather grumpy. I have worked out the eggs should hatch on 4th May if all goes to schedule.