This morning I dashed into town to pick up a carrier to prepare to pick up the new chickens. Armed with two large carriers, I walked down to the allotment and put them into the greenhouse. I spotted Geoff in the clubhouse and stopped by to say hello. 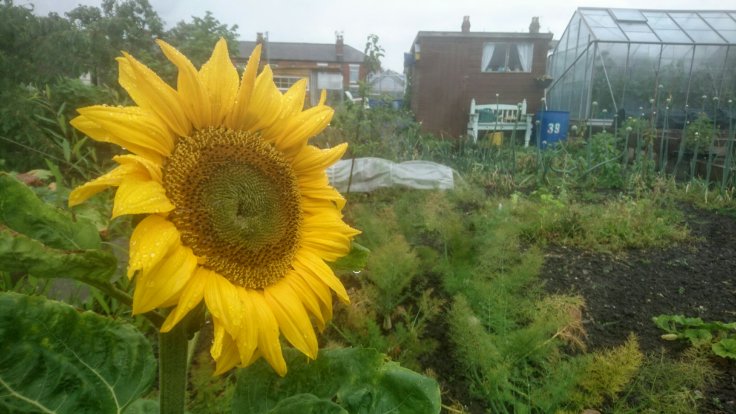 Upon arrival at the clubhouse I discovered that lots had been happening over the past week. I appear to have missed a hive on the community garden swarming onto the olive tree, the arrival of the split hive and the delivery of 15 chicks into Phil’s coop. Honestly, I am away for just a few days and I miss everything! 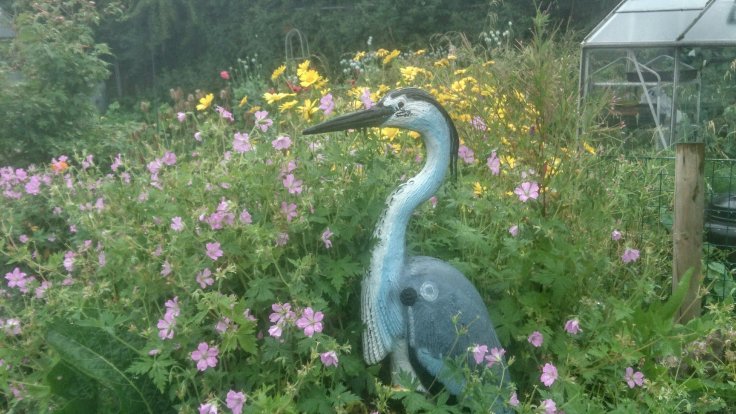 The only hive on the community garden had swarmed yesterday, with large amounts of bees settling on our olive tree. Steve and Phil dashed down and brushed the bees from the trunk into a bag and put them into a spare hive. Half an hour later, everything was back to normal. Phil reckons the Queen has moved into the new hive as all the bees went in without a fuss. Steve opened up the old hive to find several Queen cups, which he has left so the remaining bees can grow their own Queen.

The new chicks are a mix of Cream Legbars and Leghorns that Steve managed to hatch in his incubator. They are just a few weeks old and utterly adorable. Unfortunately for Cliff, all but one of the Cream Legbars are male so will have to go down the farm. The Leghorns look identical but some have slightly larger combs which is suggestive that about half of them may be cockerels. They are all happily installed in Phil’s coop, with Phil’s Welsummer hens now in Mick the Greek’s coop.

After cooing over the new chicks, I went down to sort out the old girls in the main coop. I moved the feeder as the food has got wet which means it turns to a horrendous brown cement that is almost impossible to clean off. Food all sorted and water bowl cleaned and refilled, I left the girls to go and check on Emily.

I found her rather bedraggled with her chicks in their new coop. Emily seemed distinctly unimpressed and through the door to the coop, I spotted an egg. It’s so rare that she lays one that I was completely surprised. But it also showed it was time to move her out, not only for her own good but to protect the chicks. Geoff and I caught her and moved her into Geoff’s coop. His chickens weren’t too impressed and we spent a while trying to stop the start of WWIII. It may take a few days but they should hopefully settle down. As we continue to rotate chickens around, we will eventually get each chicken back to its proper coop!

The chicks have been growing massively the last week. One of the golden laced wyandottes seems to have grown bigger than the other and is starting to make odd noises which are suspiciously close to crowing. Luckily, Phil has a friend who is looking for a cockerel for her small holding. I am still hoping that the other gold laced wyandotte is a girl. The Plymouth Rock is fully feathered and absolutely stunning to look at. She is a bit timid and definitely at the bottom of the pecking order in there. I plan to put her with Millie and the other chick provided it turns put to be a girl…

I received a text from the charity saying there had been a delay and we could pick up an hour and a half later than planned. Geoff and I headed off home for a break from the rain. I scoffed a quick lunch and headed over to Geoff’s armed with two pet carriers.

We drove a short distance to the pick up point and parked up. The charity had set up a large netted tent to hold the chickens. They had been checked over thoroughly and had a break after their journey from the farm. There were at least 40 birds when we arrived. Geoff went into the tent with one of the ladies in charge to help put the girls into the carriers, two in each. 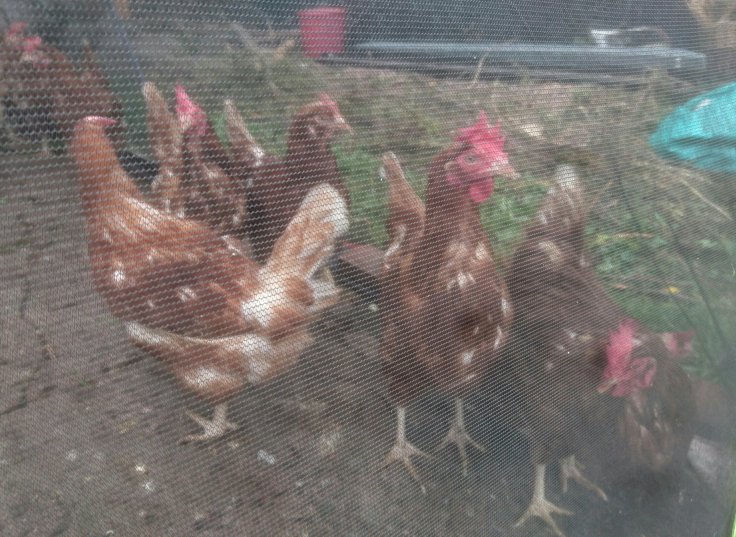 We loaded them into the car and drove straight to the allotment. Geoff had done a brilliant job in pre-preparing the coop for them. It took some persuading but I got them out of the carriers in the end. They all huddled at the end of the run and we left them for half an hour to settle in. 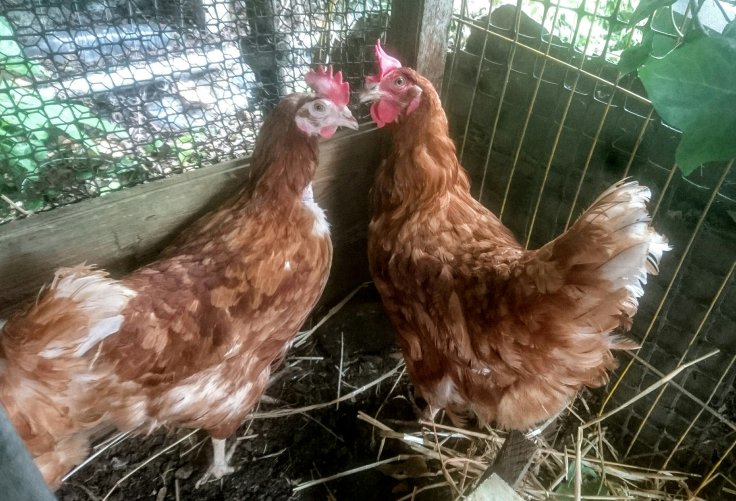 After a chat and a cuppa, we walked back to find one of the chickens exploring and finding the food bowl. Hilariously, she tried to jump onto the food bowl, balanced for a second before falling off spectacularly. Geoff pottered off home whilst I stayed in the coop to see if they would find the food. As an added incentive to come nearer, I grabbed a handful of weeds for them to eat.

It took a while but four of them came out with the other two still hiding by the nest box. I am sure they will come out tomorrow once they have settled a bit more. 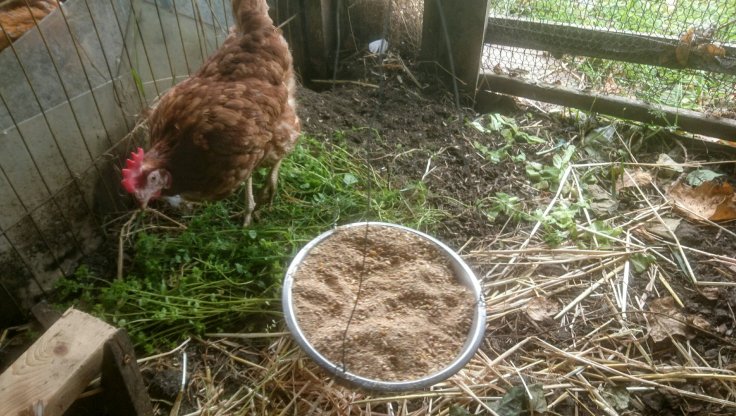 Before I left one of the chickens strayed a bit close to the other coop and had a run in with a very feisty bantam. It was rather spectacular – chicken fights always are. I managed to catch a short part of the fight before separating them. I dashed to the greenhouse and dragged a large plastic panel into the coop to block access between the coops. The reduce girls have already been through a lot, they don’t need the added stress caused by an irate bantam!

Just before I left, I noticed one of the new girls was doing something rather odd. She had dug herself a hole and after spending some time sitting in it, decided it wasn’t quite right. She spent quite a lot of time grabbing straw and throwing it on her back. At first I thought she was putting more straw into her hole. But no. She turned around and kept doing it. I have never seen a chicken behave like this and I have no clue why she was doing what she was doing! 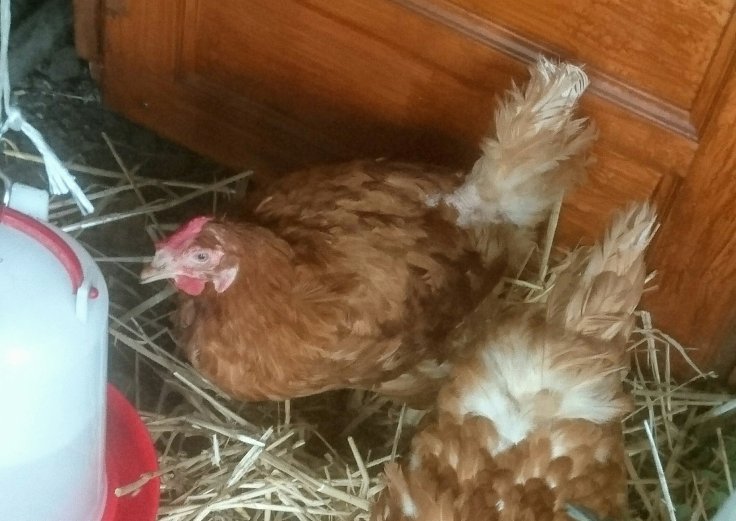 A summary of the many parts of the musical chicken game today: Emily moved into Geoff’s coop, Cliff’s new chicks moved into Phil’s coop, Phil’s chickens into Mick the Greek’s coop, rescue chickens into Chris’s coop pending extension on our new coop on Rachael’s plot. Future musical chickens include moving our chicks into our main coop when they are big enough, retrieving Millie from Cliff and Emily from Geoff.

One thought on “Musical Chickens”