This weekend has been busy! With the hubby off at a conference, it was time to carry on with the epic amount of digging.

I arrived and fed the chickens, who seem to have been fed some sort of super food by Geoff, as they are producing eggs like there is no tomorrow! Six eggs yesterday and another six today, and who knows how many tomorrow! We currently have three dozen at home – must start selling them off on Monday, especially if the girls keep going at this rate!

I managed the tricky task of extracting grass grown around the base of the raspberry canes. It took ages, I was worried that I would kill off the raspberries whilst I was digging up the grass. But all the raspberries seem to be ok thus far..

I also planted two cranberry bushes and the blackberry I bought at the seed sale. The cranberry bushes, bought from Wilkinson’s, hopefully will survive (the ones I bought last year died a long slow death).

The rhubarbs that I dug up a few weekends ago from the middle of the potato bed in the new plot, have been moved and planted in the rhubarb boxes behind the fruit trees. I hope they survive the move! I am reliably informed that they are fairly resilient.

I took a quick break before attempting to plant our new cherry tree at the back of the top plot. We are also going to add in a couple of other fruit trees, precisely which type are yet to be decided….

The seedlings in the greenhouse appear to be doing well! I added trays to put the pots in to keep the water from destroying the table (its a bit dodgy to start with) – it has the added bonus of allowing the plants to extract water from the tray so I don’t have to go down every day to water them! 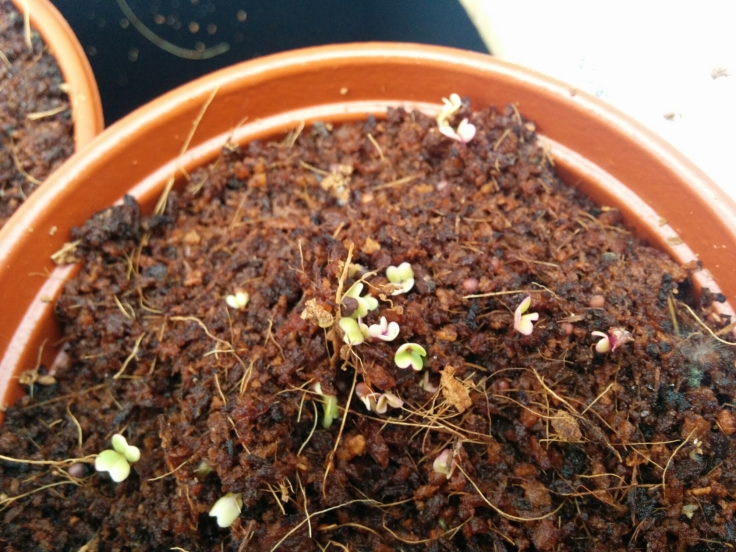