This week has marked the first week of freedom from work – and was obviously spent down the allotment (when the rain eventually let off).

I have managed to completely weed 2/3 of the top plot, clearing away masses of weeds the like of which you have never seen before! Fortunately, the plants hidden underneath are still alive, and now that they have room they should thrive.

Today, we dug out masses of grass and continued to do battle with the weeds despite the rain showers and heat exhaustion. We have also started to put down weed fabric on the plot to stop the weeds coming back (in theory). A word of caution though: it may look easy to get the fabric pegged down but it is not! The pegs are made of plastic and thus bend rather easily when hit with a hammer. Frustration ensued and the placing of the weed fabric around the fruit trees has been left half finished, to be completed another. 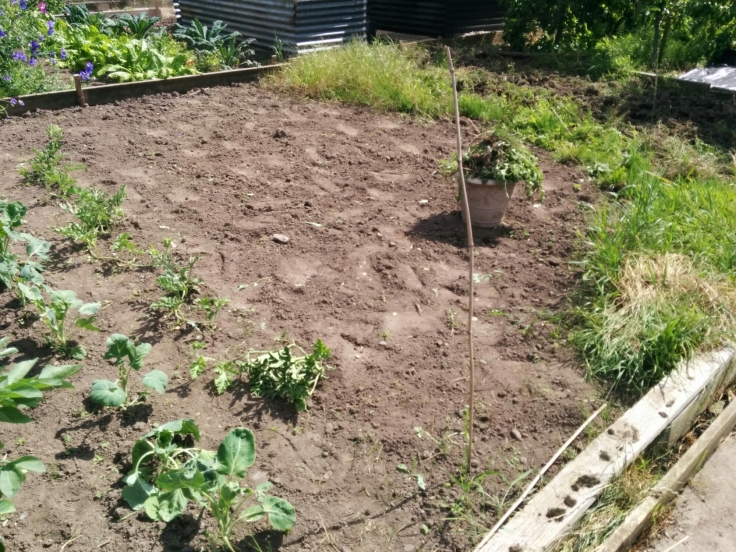 The next major project (after the weed fabric fiasco and weeding of the new plot) is to expand the chicken coop and quail pen. This involves drawing out the proposed design and giving it to Chris (the site warden) for checking and approval. Provisionally we have approval after I showed him roughly what we were planning. All that is left to do is find the fence posts, get more fencing, demolish the old shed, buy, build and install the new shed and work out how to separate the new chicks from our main flock. Oh, and expand the quail pen….

Speaking of chickens, after surviving the more infestation, we appear to have developed quite the rat problem. Currently we have 4 rat traps in the coop and have been digging through the rat tunnels in an attempt to scare him off. Cliff, the resident pest control man, will keep an eye on the situation but I suspect the rat is living under the rotting chicken shed, so we won’t be able to rid the coop of it until we we rid of the shed. Let’s hope Cliff’s traps work!

I have also started on building g the first of two fruit cages on the bottom plot – one over the raspberry bushes and one for the black and red currant bushes.

In addition to all this, we have ordered some new trees and plants for the allotment, due to arrive mid-November or December. This order includes four new trees (Apricot, Nectarine, Plum and Almond) as well as a grape vine, passion fruit bushes, lingonberry bushes and something called a pineapple guava. Looks like the other half will have his work cut out planting those!

I have recently got in touch with a friend from university who is getting rid of a greenhouse. I plan to purloin this greenhouse, placing it over the glass strewn section of the bottom plot and grow our new exotic plants in it (grapes, passion fruit and pineapple guava). How exactly we will move the greenhouse and re-erect it is beyond me, but I am sure someone will help us!

So tomorrow involves finishing off weeding the top plot, catching the beast of a rat living in the chicken coop and clearing large swathes of weeds from the bottom plot.