Today was a very busy day down the allotment – we had to make the most of the rare sunshine before it pours with rain again! 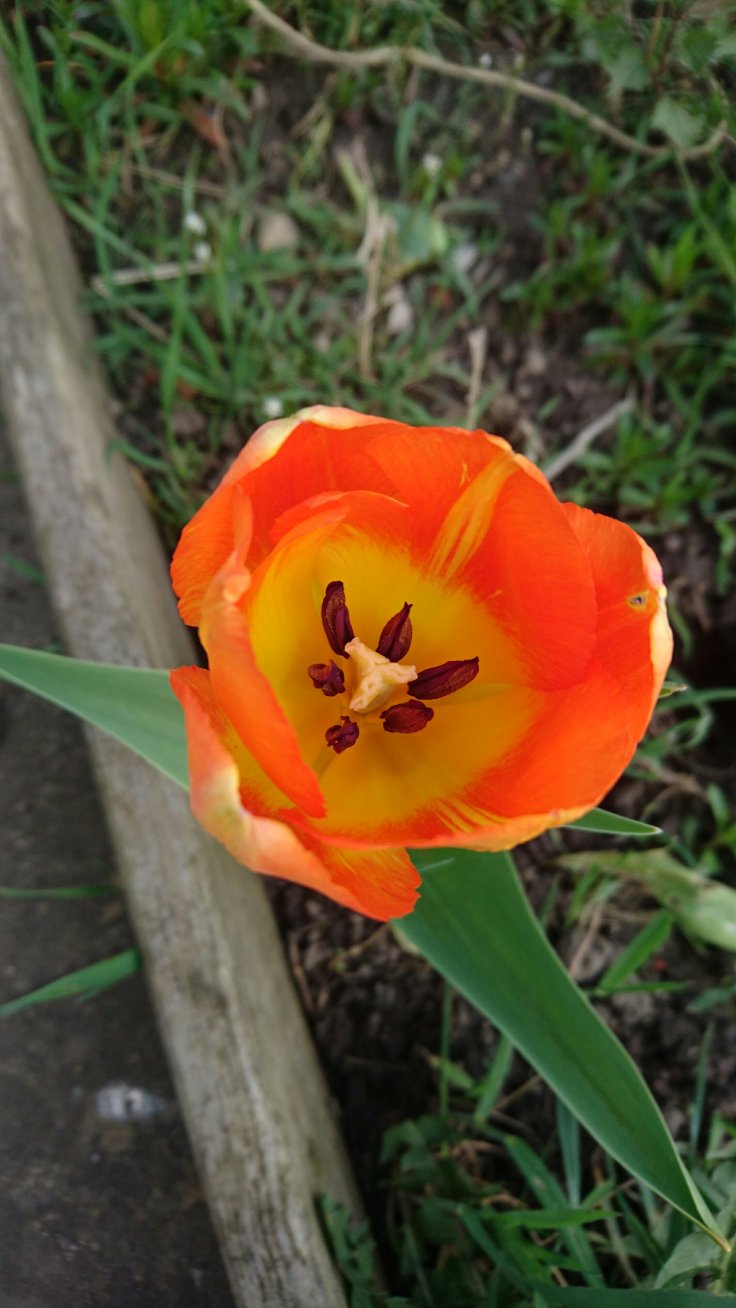 Whilst I ran to and from the allotment repeatedly as I kept forgetting to pick up key bits – an outdoor brush, rake, egg boxes, you name it! While my long suffering husband dealt with the chickens and generally amusing himself by picking them up much to their horror.

I made a start clearing out everything from the greenhouse ready for clean it before dismantling the glass from the roof. I dragged everything outside (the small coop, potting tables, general rubbish and about a million plant pots) and brushed the floor to find we actually have a floor! I then ran into town to pick up glass cleaner and cloths to clean the greenhouse glass. 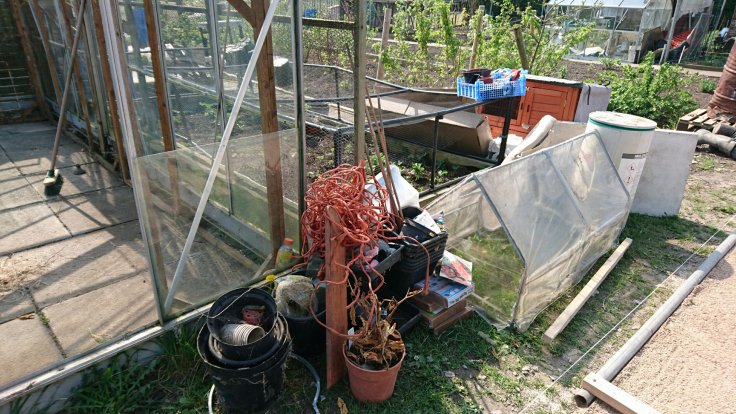 Whilst I dashed into town, my husband was busy obliterating the remaining weedy section by ferociously digging out every weed he could find. The whole plot looks amazing! Now to fill it with plants! 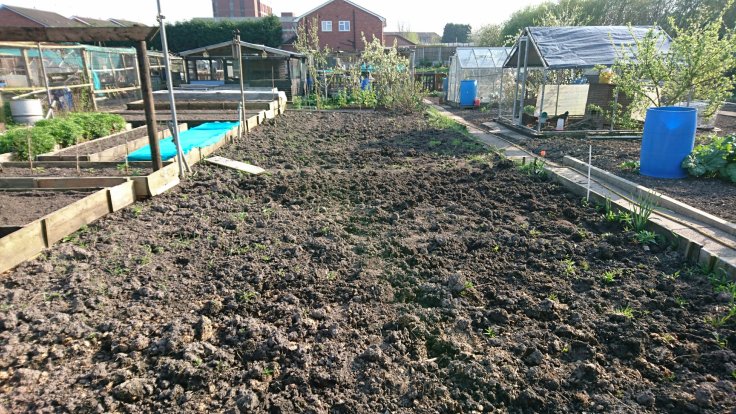 As he was finishing off the weeds, I started to do a job I should do every year but never seem to get round to, cleaning plant pots. It reduces the chance of cross contamination or disease from the previous plant with the new one. I set myself up a little washing station by the strawberry bed which came in very handy as a drying rack! 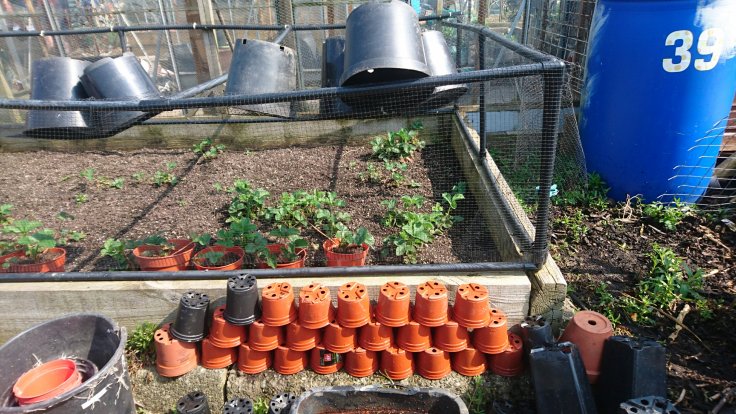 We quickly adjourned for lunch at home – a 2 egg omelette made with our own freshly laid chicken eggs – scrumptious! On our return, we started to tackle the greenhouse. Initially I thought we would only have to take out the roof panels. If only it had been that simple…

Before we could take out many of the panels, we had to remove the protective cage to allow us access to the other side of the greenhouse. We asked Steve who built it how he had constructed it and after borrowing a couple of screwdrivers, set to work. It appeared to be kept in place by 4 screws, screwed into the edge of the strawberry bed. Simple you would think.

It was not. The screws has rusted and were incredibly tight and almost impossible to move. Every. Single. Screw. It took two of us to shift those 4 screws with the last two taking in excess of half an hour to remove. With the base finally free, we attempted to lift the cage away from the greenhouse. It didn’t work. It was screwed to the top if the greenhouse. By another 4 screws. Swearing loudly, we took turns getting them out before trying to remove the cage again. Still no luck. Nothing we did made it move. It was completely stuck and we didn’t dare tug at it too hard lest it smash the glass or break the greenhouse frame.

At this point, my husband disappeared into the clubhouse for a few minutes whilst I walked round and round the blasted greenhouse trying to work out why it wasn’t working. In the end, I found a fifth screw artfully hidden beneath the skylight. This finally extracted, we were able to move the cage. It is unbelievably unwieldy and heavy. We barely managed to move it with both of us dragging it onto the soil, resoundingly cursing Steve and his flippant comment about it only being a couple of screws and how it wouldn’t take us long.

Back to removing glass from the roof and we finished eventually about 3 and a half hours after we started. We will have to take out all the glass, every bit of it another day but neither of us could bear the thought of doing anymore today. 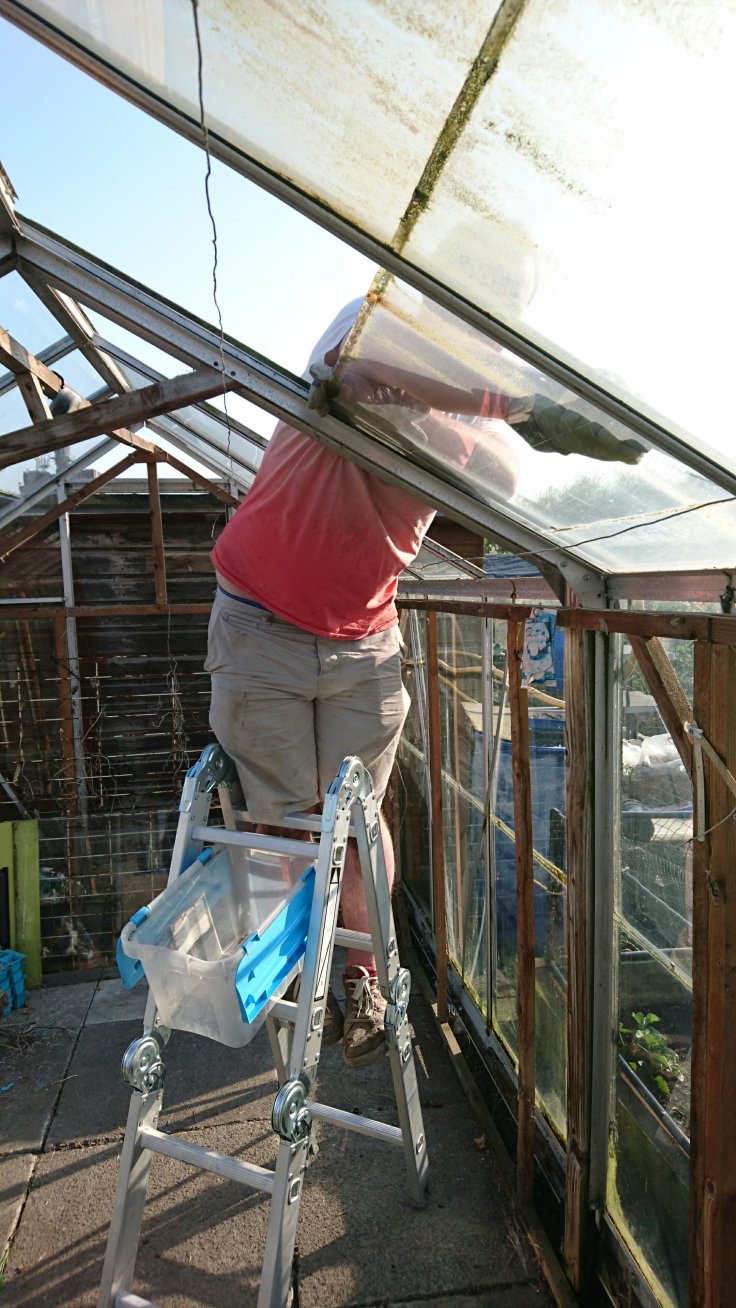 I think when we fix the wooden frame of the greenhouse we will keep the back part as a greenhouse and use the front as a covered growing area. The greatness of this idea means less weight for the extended greenhouse frame and less hassle putting all the glass back! We could get some of that clear plastic boarding and use it for the roof, that way we would get lots of daylight through the roof. We could then either use the glass or netting for the sides.

Tomorrow’s jobs include taking down the rest of the glass,stacking the glass safely away, finish cleaning the plant pots and put everything back into the greenhouse. Another busy day ahead!

One thought on “Man vs Greenhouse”